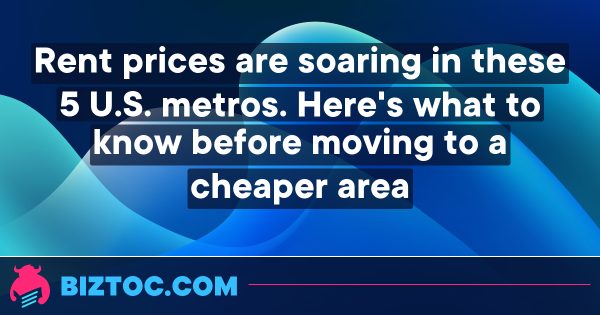 As rising interest rates and surging property values prevent more families from buying a home, the demand for rentals has soared, with the highest rent prices in the sunniest states.

Rent prices for single family homes swelled during the first half of 2022, hitting a national average of $2,495 a month — a 13.4% increase compared to the same period in 2021, according to a new report from national real estate brokerage HouseCanary.

While cities in warmer climes like California and Florida dominated the list of highest median rent prices, midwestern states such as Ohio earned the top spots for most affordable rent, the report found.

More from Personal Finance:5 markets where home sales are cooling fastestThese 10 U.S. real estate markets are cooling the fastestMillennials’ net worth more than doubled during pandemic

The findings come as more Americans, including some six-figure earners, are living paycheck to paycheck amid rising costs.

Annual inflation jumped by 9.1% in June, growing at the fastest pace since late 1981, according to the U.S. Department of Labor.

These U.S. metropolitan real estate markets had the highest median single-family monthly rents during the first half of 2022:

These U.S. metropolitan real estate markets had the cheapest median single-family monthly rents during the first half of 2022.

And a record number of U.S. homebuyers are still eyeing cheaper options from cities like San Francisco, Los Angeles and New York, according to a July report from Redfin. However, remote work may come with a hidden cost.

While many have enjoyed the perks of remote work, research shows it may stunt wage growth over time, according to a working paper published by the National Bureau of Economic Research.

There may be other ‘hidden’ expenses of moving

While moving to a cheaper area may slash your rent or mortgage, other unexpected costs may hurt your budget, experts say.

Losing your network or your village is a big hidden expense.
Bill Parrott
President and CEO of Parrott Wealth Management

Without access to friends and family, costs like childcare, pet sitting and more can add up quickly, he said.

And traveling may be more expensive from a smaller city, depending on your airport or transportation options, said Caleb Pepperday, a Pittsburgh-based CFP and wealth advisor at JFS Wealth Advisors.

“It’s best to research some of these costs before moving to a new city to help make your decision,” he said.