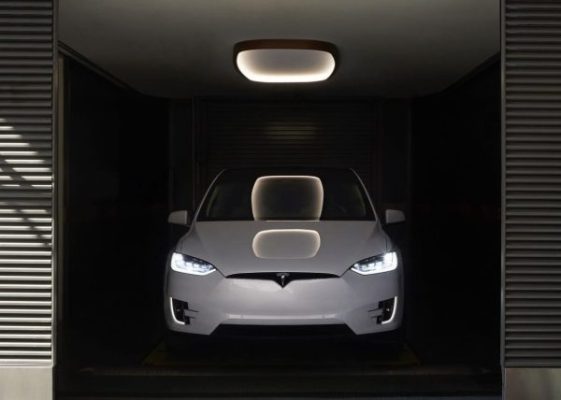 Hidden deep below some of New York City’s most luxurious apartment buildings is an exclusive world of futuristic parking spaces where high-end vehicles are parked and retrieved by robotic parking systems.

The high-tech spots are a rare amenity in the Big Apple, and if you want your car to occupy one of these VIP spaces you’ve got to be ready to fork over hundreds of thousands of dollars.

The spots are only accessible to residents of buildings where the apartments will set you back several million, and if you want your car to live there too you’ll need between $300,000 to $595,000 more to score some precious space in the private garage.

High above the 22nd St condo’s underground garage is the wraparound terrace of a 5-bedroom duplex apartment that recently sold with a $300K parking spot for $9.45 million.
DroneHub Media

Earlier this month, Lori Alf, a full-time resident of Florida, picked up one of the rare parking spaces for $300,000 when she purchased the building’s priciest unit: a 5-bedroom duplex spanning almost 3,800 square feet.

She told CNBC the package deal, which totaled $9.45 million, was a gift to her children who are now spending more time in New York.

Now when Alf or her kids want to park the family’s Porsche Cayenne in the condo’s garage they pull up to a kiosk where the wave of a small radio frequency ID tag unlocks access to a subterranean car lair where no humans are allowed.

Pressing a button on the kiosk sends a jolt of life into an empty metal pallet one level below. It slides across a track onto a powerful lift that sends the empty pallet up toward ground-level to meet the Alfs who can then carefully position their car on top of it.

As a vehicle enters the automated system a motion board delivers messages to the driver to assure the vehicle is positioned properly for the parking process to begin.
CNBC

Before their wheels are whisked away, a set of cameras scan the system’s entryway to confirm the car’s trunk and doors are all closed — and that there are no objects or humans left behind that might obstruct the automation.

When the scanners deliver the “all clear,” the pallet, with car on top, disappears into the floor, pausing briefly as it descends into the basement to spin the vehicle 180 degrees before slotting it into one of the empty spaces.

The system can lift and shuffle two dozen cars across four rows and two levels.

A car parked on the lower level of the automated parking garage at 121 E 22nd St where prices start at $300K per spot.
CNBC

Retrieving the car is a lot like making a selection from a giant vending machine. Residents swipe their RFID tags once again, and the system delivers their cars in about 2 minutes and 15 seconds.

One of the perks for Alf: She never has to put the car in reverse to exit the building.

“The car is turned for you by the robot,” she told CNBC. “Who doesn’t live for a robot that sets you in the right direction in NYC?”

Pedro Fernandez, a local sales representative for Klaus Parking, the company that sold the German-made parking system to the building’s developer, told CNBC it’s the most automated garage he’s ever installed in Manhattan.

The company’s top-tier system typically costs between $50,000 and $70,000 per spot installed. Fernandez said developers invest over a million dollars in the intelligent parking infrastructure because it’s super efficient at arranging vehicles and maximizing space.

The view inside the robo-parking machine at 121 E 22nd St reveals a system of pallets and hydraulic lifts that maneuver cars around a two-tier subterranean parking structure.
CNBC

“There was no other way to park 24 cars,” Fernandez said of the garage space under 121 East 22nd Street.

The self-parking system can unlock more spaces per square foot because it doesn’t require the ramps and driving lanes you see in most conventional garages, he said.

“As crazy as it may sound, $300,000 for a residential parking spot is considered a reasonable price in New York City,” said Senada Adzem, a Florida-based real estate broker at Douglas Elliman, whose team represented Alf in her recent purchase.

Adzem told CNBC spots in the system that include a charging plug for electric vehicles will run you $350,000. And whether it’s electrified or not, every parking spot carries a $150 per-month maintenance fee.

“The overall lack of parking in the city, an ongoing problem with no end in sight, will only escalate such pricing,” said Adzem.

She believes short supply could turn the seemingly lavish expense into a money-maker for owners, who could eventually resell their spot at a profit.

A car inside the automated parking garage at 520 West 28th where spots start at $450K.
Martien Mulder & Related

Across town, parking spots are even pricier in a building that was once home to popstar Ariana Grande and currently houses rock musician Sting and his film producer wife Trudie Styler.

The luxe residence, designed by famed architect Zaha Hadid and developed by The Related Companies, includes a 4,500-square-foot penthouse currently on the market for $16.5 million. And according to listing agent Julie Pham of Corcoran, a parking space in the building’s garage can cost upwards of $595,000 more per vehicle.

“I’d never seen anything like it before,” Pham said of the unique amenity.

Residents can use an app to communicate with the so-called “secured parking portal” and remotely start the automated retrieval process so the car is ready to go when they are.

While Pham wouldn’t reveal the identities of any past or present clients, she did tell CNBC the automated parking was a major draw for one famous resident, who had a security team examine the parking area prior to moving in.

The unnamed celebrity’s representatives OK’d the deal in part because the star could enter and exit the garage in total privacy, Pham said.

“They liked the idea that you didn’t have to engage with a valet or an attendant, or that anyone couldn’t come in right behind you,” she said.

And during the pandemic, the broker said, residents who wanted to minimize their exposure to Covid-19 loved that they could deposit and retrieve their vehicle without handing over their keys to a valet.

While the automated spots are pricey, they’re not even close to NYC’s most expensive.

In recent years, some condo developers have pushed their asking prices for a basic concrete-and-yellow-stripe parking spot to the $1-million mark, according to Jonathan Miller, president of Miller Samuel, a firm specializing in real estate appraisals and consulting. Still, he said, it’s unlikely a spot with a 9-figure asking price has ever lured in an actual buyer.

“I never found evidence of their actual closings,” he told CNBC.

Miller, who analyzed public records at CNBC’s request, said one of the most expensive parking spots sold in town last year was located at 220 Central Park South, where a parking space went for an impressive $750,000. Miller said, based on public records, it appears connected to an apartment in the building that traded for $16 million.

“It’s really tough to track since most sales are embedded in the sale of a unit,” Miller told CNBC.

And it’s even tougher to track sales of spots in the newer automated systems, because, in many cases the spots are actually licensed to buyers, not deeded and sold like most real estate, according to brokers.