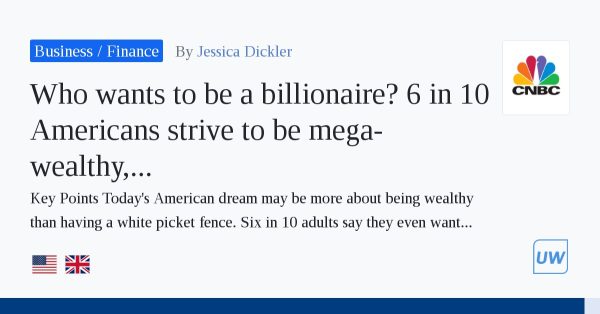 Be like Mike … Bloomberg, that is. That’s what many Americans apparently aspire to today.

Some 44% of U.S. adults believe they have the available tools to become billionaires, largely fueled by speculative investments such as cryptocurrencies, according to the Harris Poll’s recent “Americans and Billionaires Survey.”

More from Personal Finance:Workers have the ‘upper hand’ right nowTips for paying down your credit card balanceNearly half of all Americans are falling deeper in debt

“People want to achieve a higher wealth status, and the way to do that is to use investments to build assets and generate income,” Rappina added. “”Investments don’t make you rich; income makes you rich.”

At the same time, most Americans have a love-hate relationship with extreme wealth.

“There is a mounting disconnect,” the Harris report found: Six in 10 adults want to become a billionaire one day. Meanwhile, 40% said they despise billionaires. Many also said that billionaires have the responsibility to better society but aren’t doing enough.

As the rich get richer, 66% of adults see wealth inequality as a serious national issue, and nearly half of Americans, or 47%, believe that there should be a limit to wealth accumulation, the report also found.

A mobile billboard in Washington, D.C., calling for higher taxes on the ultra-wealthy depicts an image of billionaire Jeff Bezos on May 17, 2021.
Drew Angerer
Total
0
Shares
Share 0
Tweet 0
Pin it 0
Share 0